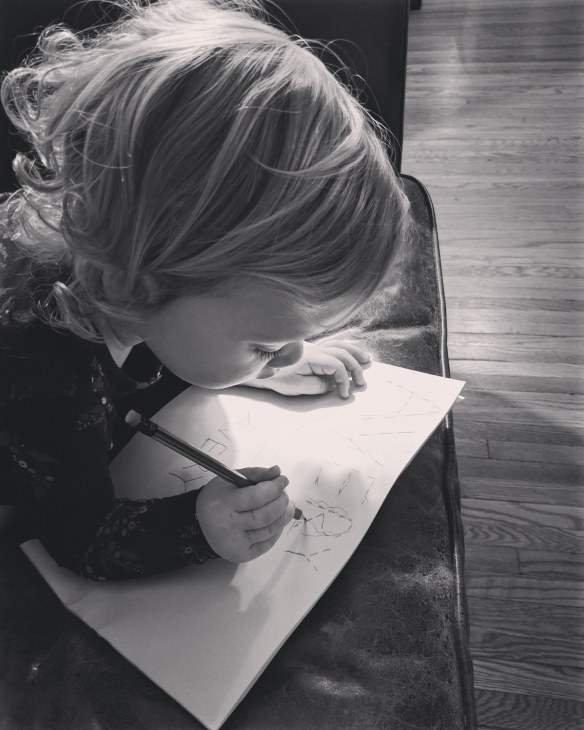 Avery has always been a determined learner. She has a strong inner drive to learn new things and to practice new skills. For example, she has been working on writing letters since she turned two. I’m always amazed by her aptitude and determination and focus. I try not to shower her with “Good job!” or “you’re so smart!” but rather say things like “you’re working so hard on that letter,” or “wow, look at that Q you drew!” That’s how all the parenting books have told me to give praise, so that the praise encourages and acknowledges the process and doesn’t come out sounding empty after the 100th “good job!” (That said, I of course say “good job” and “you’re so smart” some of the time).

But now I’m seeing behaviour that’s worrying me, and it has me questioning how I praise… She’s so hard on herself. She was working on drawing an A along a dotted line stencil (her own idea of fun, not prescribed practice or anything) and every time she went outside the line she put her hands to her face and said “oh no! Not right!” and then she’d hurriedly erase it and try again. She’s not even 2-1/2 yet. She blows my mind with the things she has picked up on and yet, I don’t want to push her. I like the idea of early childhood being about play and freedom from performance pressure… Is her self-criticism due to something I’m doing wrong as a parent? Am I expecting too much of her? Or is being tough on herself just part of who she is? And what can I do to help her balance wanting to master new skills with enjoying the process and taking life a little more lightly?

8 thoughts on “My two year old is hard on herself”